A Great fortnight and a FKT (Fastest Known Time)

Two weeks with some great and varied running. Still recovering from yesterday’s effort but more of that later.

The week after our Santa Cruz island and Backbone Trail adventures was quiet but I was entered for the Chuckanut 50k on 17th March. This year would have been a great race as organiser Krissy had obtained a huge permit for 1000 runners and was celebrating the 20th year of the event in style. Unfortunately I waited until I had news of a job before committing to the plane tickets and, by the time I knew I had a job, plane tickets were $500 and up. A little crazy for a 50k.

So, the alternative was round 1 of the local trail series. A simple 11 mile figure 8 loop in Romero Canyon which was pretty much the second run I discovered when we first moved to Santa Barbara. Santa Barbara has some wicked fast runners and ex professional cyclists so local races are no walkover but I thought the unusual conditions might help me – wind, rain, low cloud – all very unSanta Barbara like. 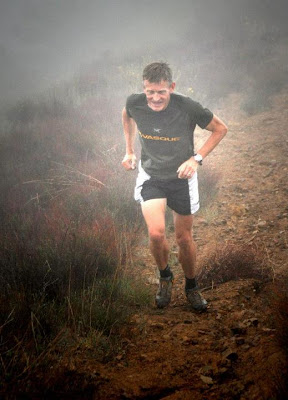 5th place was all I could manage but I did happen to remark to my friend Howard that the forecast was for the rain to turn to snow right down to about 3000ft overnight. He readily agreed to my suggestion that we might have some fun in the snow on Sunday and so I found myself leaving the house in the dark on Sunday morning for a rendezvous in Ojai. 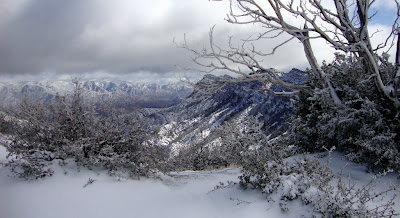 Looking into the Sespe Wilderness 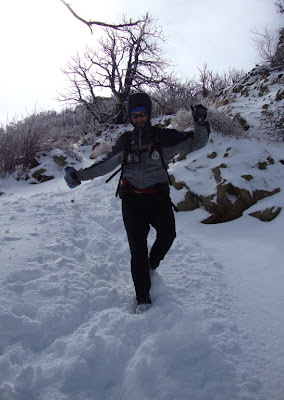 We took a gnarly jeep road up the hill in his big rig and set off running up to Topa Topa and Hines Peak. Sure enough, snow was at 2500ft, early on it was all crispy and we managed to have one of those “one Kahtoola micsrospike each” mini epics to negotiate an iced up ridge on Hines (we elected the powdery bushwack for the descent rather than the exposed ridge). An outing of around 22 miles and 5500ft capped a week in which I recorded under 50 miles but had a lot of fun.

When we ran the Backbone Trail over 2 days recently, I made no secret of my interest in running it whole and that the current record time would soon get reduced. Perhaps the fact that one of the two guys who set the current record stated he thought it would stand for fully two years also spurred me on?!

The Backbone Trail was first conceived almost 20 years ago but has only just come into proper existence and indeed one section still crosses a small section of private land with “grace and favour” access. It links a series of existing trails running from the mountains just inland of Santa Monica through to the fabled Ray Miller trail in Point Mugu State Park. Setting off from the Eastern end you quickly gain height to look over downtown LA and planes taking off from LAX. The trail, though is continuous with no more than a couple of hundred yards of tarmac along its whole length. A few sections are fire/jeep road but the vast majority is singletrack – some groomed and some quite rocky. So, it is a remarkably continuous route, often cleaving to ridgelines and with great views to the ocean and inland. 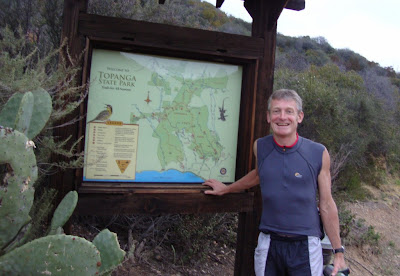 All previous accounts make a few things clear – most have ended up starting of finishing in the dark because of the length of time taken and the fact that they have run in the winter for cooler temperatures. Heat seems to be a significant factor in accounts and it’s pretty much impossible to do the thing unsupported because there is little or no water for most of the route. Finally, route knowledge is critical – there are many many trail junctions with few good maps and the route is completely unsigned in parts. My recce in the company of the local expert, Howard, would be my secret weapon. 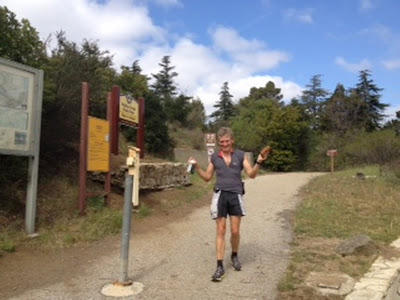 It's warming up - bottom of the big climb from Piuma

Once the forecast showed low temps, overcast conditions and low probability of rain I knew it was time to have a go. Another early weekend start then. 04.30 alarm and on the road at 5 for the drive. Inauspiciously, the park gate was closed when we arrived. Fortunately we were able to park within a ¼ mile of the gates and so my planned 07:00 departure was only delayed until 07:15. Lynn had very kindly given up her whole day to crew for me and had a car full of the usual crap that accompanies these attempts – with the addition of the means to create grilled cheese sandwiches, my recent favourite. The two guys I had hoped might pace me near the end were both out of town so it was to be a solo but very well supported attempt. 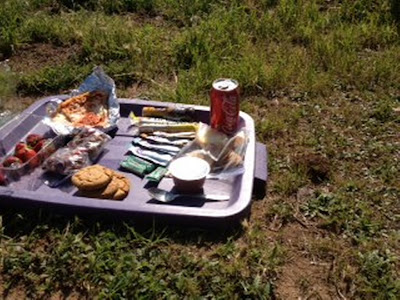 Right from the off it felt good – in the flow and just covering the miles without too much effort – so much so that I reached the first support point about 17 minutes ahead of schedule. This surprised both of us; my schedule was really just a self produced thing based on Naismith factors but I had cross checked to the previous best East to West time of 15:07 and it seemed to work. Same story at the second support point 18 miles in – another 9 or so minutes up. After this though, the minutes gradually slipped away until I was back onto my 12 hour schedule so maybe I went off a little too fast or maybe my schedule just didn’t factor in enough “slow down when you are knackered” reality.

At miles 25 a long climb begins, it is exposed to the sun and, sure enough, that was about when the sun came out. Still though, by local standards for late March it was a cool day and there was a great breeze. At about half way it still looked as though 11:?? was a possibility but then I started a bad patch around mile 40 on a section I had labelled as 5.5 miles but felt like 6.5. Recovery from that wasn’t too bad but once I left the final support point at mile 52 the wheels really fell off on the climb up to Sandstone Peak. This was where I had struggled in the Ray Miller 50 a few weeks earlier only worse – I just could not seem to get powering up the rock strewn path. Fortunately my body was still responding to gravity and the longest downhill section of the whole trail was just around the corner. For a while I had been worrying that my improvement over the previous best of 12:47 would be a mere few minutes but then, as I ascended the final hill onto the Ray Miller loop I now know well I calculated that a little over 12 hours should be possible if I could run the undulating fire road along the top and descend quickly to the finish.

Sunset at the top of the final descent - Ray Miller

I bust an absolute gut to make sure the final time was 12:0? – in the scheme of things, what does it matter but in that moment I determined that I did not want it to be a second over 12:10. As I touched the trail sign at the finish I had 19:23 on my watch but the date/timestamp on the camera recorded at start and finish said 19:24 so an elapsed time of 12 hrs and 09 minutes is what I am claiming. 38 minutes ahead of the previous best.

2 great weeks and 2 VERY tired legs today. Huge thanks to Lynn without whom I would have not been able to do this and to her great grilled cheese sandwiches. 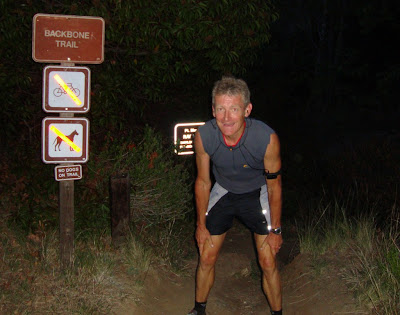 Very impressive Mark! Love the pictures and write up.

Very well done Mark. That was a productive alternative to Chuckanut.

Congrats. Nice report and look forward to the throw-down that will ensue to challenge your well earned accomplishment.

Hey thanks Chris - I know you and Eric can go faster - you just need the right combo of temperatures and daylight that I was lucky enough to have.

Now look what you have done,created a newtime to be beat!!! Enjoyed reading the blog.

Mountain Sports is an outdoor store in Arlingon TX with a large selection of gear for backpacking, rock climbing, snow skiing, snowboarding, adventure travel.
A mountain sport or Alpine sport is one of several types of sport that take place in hilly or mountainous terrain. All these sports require special equipment,
More

Hi visit to this site you can learn more things about mountaineering :

You can expect to find regular updates on the trials and tribulations of my training and racing and, over time, accounts of various races, runs, adventures and record attempts from the past 20 years of running long in the hilly and wild areas of the UK and overseas

My favourite people, companies and ideas